7th June 2017 MarketMagnify Securities In Ban
If you report results which surpass analyst expectations of on continuous basis rest assured that D-Street will reward you. The March quarter results for India Inc. did not disappoint D-Street much, in fact in some cases it was better than expectations.
India Inc. reported steady progress in revenue and net profit growth for the quarter ended March 31. A sample of top ten companies whose net profit more than doubled on a year-on-year (YoY) basis for the quarter ended March 2017 outperformed benchmark index returns.
The companies which saw its profit doubling in the last one year gave return up to 313 percent in the last one year which include names like Escorts, MOSL, Capline, Sundaram Fasteners, GNFC, Sunteck Realty, Dewan Hosuing etc. among others. 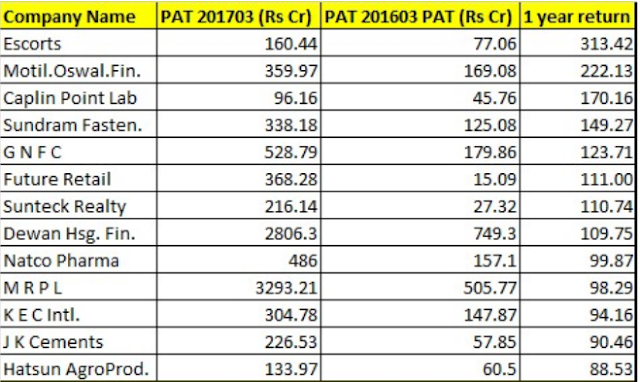 Almost 43 companies saw their profit doubling for the quarter ended March 31 compared to corresponding quarter of last fiscal. Investors have not missed the opportunity in spotting these multibagger bets.
For read more click here https://www.marketmagnify.com/freetrial.php or just give a Missed call @7879881122.
Leave a comment

As we said in our commentary, market is in correction mode today